You are here: Home | Blog | The soul-web of a dahlia, inspired on Father’s Day

The soul-web of a dahlia, inspired on Father’s Day 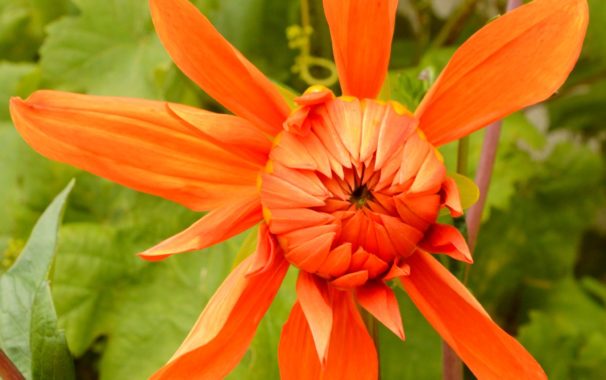 In November 2017 my father died at the age of 86. He had been increasingly physically disabled for several years, but paradoxically healthy, when he had a sudden stroke one Saturday evening. After a few days in which he appeared to be stable, his condition deteriorated and he entered the active phase of his dying, a process that took 5 nights and 4 days. To ensure that my mother rested, I stayed with him at night, sitting vigil through the night hours as he struggled to release himself from his physical form – dying being every bit as hard work as giving birth, on occasions, it would seem to me.

Our relationship had not always been easy, and we sometimes seemed to have little in common – being a product of his generation, our politics, world view and spiritual beliefs were often at odds. The workings of the internal combustion engine remain to this day a mystery to me, whilst he was an engineer, and I have always considered competitive sports, especially the team sort, to be a particular torture devised to make the lives of bookworm children like me a total misery, whilst he loved just about anything that involved hitting, kicking or throwing a ball. Sitting with him as he lay dying, everything that had been difficult just seemed to melt away, like so much snow in the sunshine, and the palpable sense of soul as love was all that filled the room.

One of the common passions that we did share was a love of gardening, although it took me many years to appreciate one of his great loves – the brash, showy, completely unsubtle dahlia – but somewhere along the way I too fell in love with them and grew them in abundance. Throughout his dying, and despite the night frosts killing off most of them for the year, his favourite, a dark orange one continued to bloom in the protection offered by being close to the house. Each morning, as I returned to the house to rest after a night by his bed, it was as though some essence of him bid me rest, and thanked me for the silent hours we had spent together. The night after his death, the dahlia too succumbed, as though, like him, it had no fight left.

The following spring we divided the tubers, and there are now several of what she calls ‘Dad’s Dahlias’ in my mother’s garden, whilst there are two in mine and one in the garden of each of my children. When mine flowered last year they were a poignant connection to him. The one in my daughter’s garden started rather late, and hadn’t flowered until the morning she gave birth to the twin girls he had never known she was expecting, and the dahlia opened two blooms, as though to welcome them. This year, the orange dahlia has been the first to open in my garden, and sitting by it this Father’s Day morning, I saw the soul web of stories that it carries for my family. I thought about our deep soul need for the other than human world, and the way that it carries soul connections for us, weaving us into the web of life, and, in the words of Mary Oliver ‘calls to us over and over, announcing our place in the family of things’. One day we will tell the twins about the great-grandfather that they never met, but whose favourite flower bloomed to welcome both of them into the world, and more threads will be woven into our family web. How important to find ways to listen for the other than human soul webs that have, often silently, supported our clients, and ourselves through difficult times.

I doubt that my Dad would fully appreciate much of what this little tale is really about, being quite a pragmatic man, but he would be tickled pink to think that his dahlias still connect him to us in this quite magically soul-filled way.

This website uses cookies to improve your experience while you navigate through the website. Out of these, the cookies that are categorized as necessary are stored on your browser as they are essential for the working of basic functionalities of the website. We also use third-party cookies that help us analyze and understand how you use this website. These cookies will be stored in your browser only with your consent. You also have the option to opt-out of these cookies. But opting out of some of these cookies may affect your browsing experience.
Necessary Always Enabled

Any cookies that may not be particularly necessary for the website to function and is used specifically to collect user personal data via analytics, ads, other embedded contents are termed as non-necessary cookies. It is mandatory to procure user consent prior to running these cookies on your website.